Got a chunk of my art backlog made into posts. Once I get an LJ version with more commentary ready I can queue them up. Hooray for art as far back as 2013 :D. Well, maybe not in this batch, I can't remember. There's five posts and this is just one minor folder, but it's a start. And I can see improvement as it goes along, that makes me happy.

I also have miso soup. I feel sick still, but. Miso soup, I've missed you. Bonus, the miso is paste and the seasoning/other bits separate, so I can pick out/toss in the tasty seaweed and tofu chunks and leave behind the evil textured green onion things (onions are my texture nemesis, seriously) and not have to fish them out later.

Tumblr tag additions: I still miss the kind that had its own little cups, it was the perfect no executive functioning left comfort food, it even provided its own spoon, ITS OWN LITTLE SPOON, but this will do for instant, I should make my own but brains :(, I have some red miso too, technically it's old but it's red miso ffs, if it's not somehow managed to grow mold despite being made of fermented soybeans and eleventybillion tons of salt it's still edible, I want to eat it aaaaaaah.

food/water/painkillers don't help, darkness does a bit but the sun's coming up and despite my assorted issues with photosensitivity and inability to deal with heat I'm still without effective curtains yayyyy (you would think it'd be easier to find good fabric for that than it is). I need to like...migrate away from the sun Arctic Tern style, but ugh moving around. all you circadian rhythm 24 hour day-loving people can keep your glowing sky ball of pain and sensory hell and your summer and explosion of allergens, I'll be over here where it's cold and dark. FOREVER, except when I want to photograph something. (I wish.)

Tumblr tags because too ill to resentenceify: I wanted to try and catch up on messages or finish scanning another chunk of sketchbook, but noooo, instead I feel like stabbyface mcnausea, what is with the fucking nausea lately, did not want exciting newer symptom.

Screw: Defeated. More specifically, drilled apart from the inside. Take that.

My wrists: Likely screwed up for a while from doing the previous by hand with a too-small pin vise bit because it was all that I had and it was fscking Sunday.

Drive: Appears to be working; initially BIOS couldn't find it but disconnecting it from the motherboard, blowing in the connector, and reconnecting it worked (um).

Mint: Mostly working so far (in fact the wacom drivers appear to be working better) other than a whole bunch of applications not respecting my system font settings...

I don't know why and uh, I kind of...need...fonts to not be antialiased, antialiased fonts + laptop screen = impossible to read headache hell.

how much of my nice, new install can I fuck up trying to unfuck the fonts because heaven forbid I want to turn OFF the blurry pain with ONE SETTING? (More readable, my ass!) WE WILL SEE.

Eight incredibly stuck computer guts type screws (the smallish ones, not the big huge heavy ones), starting to strip, holding a dying hard drive into a laptop (Dell Studio 1535).

I only have one screwdriver because both good Phillips ones in the house have dropped off the face of the earth simultaneously, and while it seems to be making okay contact with the screw bits they still won't budge. Not even a little, so it's not that they're stuck all partway out/uneven or something. I can't really apply anything lubricating/wouldn't know what, because there are laptop guts in the very immediate vicinity that might not appreciate it. Same with trying to heat or cool things drastically--the frame they're wedged into is metal too anyway. They're the thin head that lies flat against surface kind, but of course, so gripping the outside edge to wrangle them out is out too--plus two of them are out of pinching range in a narrow spot between drive cage edge and laptop side, making this even more worrying/frustrating.

Is there some clever screw-removing trick I'm missing that I can use here? Or some Phillips type screwdriver I can obtain in a very short amount of time that can deal with stripping/stuck screws better than most?

(edit) Three out of four of the extra stubborn ones out via the hit the top of the screwdriver really hard with a pliers method (thank you Google/YouTube/MetaFilter) even if I used a jar of Tamiya paint instead of a pliers (same difference). Fourth is almost entirely stripped and still won't budge, so I am giving my wrist a break and whining here. They were glued. asdfjkl;.

Small, plastic, and perfectly shaped for rolling away and under half of the objects on the average desk, it is nonetheless key to operating your Brandname product the way you like.

Sold in two different boxed sets with fifteen other things you don't need, packaged as a bonus with an expensive limited edition model Brandname, or in boxes of 320 (twelve boxes per case, minimum order six cases, domestic shipping only).

(Dear manufacturers, can you please make things like that in...neon highlighter colors? maybe something relatively professional but UV reactive for later location via blacklight? I found my waterbrush's piece after some brief worrying, but it was trickier than it should have been because it fell near a bunch of other small black connecty bits for things :p.)

If you make a show of being ~inclusive~ asking me my identity and actually give me space to talk about it, but then when asking who I want to (or don't want to) get involved with and/or bang you only talk in terms of men and women with no way to discuss it or expand/clarify/add to it or just to talk about attraction in general, you're kind of...failing at inclusive.

So, hey, is it so unthinkable that someone would know [other] nonbinary people and/or want to bang them (guess I'm not worth counting if I were someone someone else was interested in, too), or, more likely, have you already forgotten I exist and are still actually framing your study, your data-gathering, and your thinking and conclusions on "everything fits into these two boxes like so, even if some people can swap between them or be born or act a bit weird I guess"?

Or: more reasons why, important as options and labels and words can be, actual inclusion is more than just adding an option or two and some more words if you don't also think about what they mean for people and the assumptions you're making...especially if you're studying to be one of those "experts" who people listen to instead of people actually experiencing the things you're experting about.

(Latest example of this was also about autism, so double on the "experts" front. Ew.)

and because I don't have brain enough to reword the tags ramble on Tumblr: ( Collapse )

...I am okay with this interpretation.

except now pregnancy and serious plot? wow that guy's an asshole. EXPLODE HIS HEAD. wait, wrong really 80s clothes universe. Oh, I wonder if our star will have to learn to mambo in a few days? Why gosh.

(Footloose I just kept sulking because dude your plucky sidekick dude friend even got a teaching how to dance montage with a love song over it and you haven't noticed...?)

'I carried a watermelon' is now my excuse for...something. it's an excuse, all right. This is gonna end in het with the guy, alas. IT ALWAYS DOES :(.

(edit) Okay, I will admit, though, that was a nicely done fade to black. Just needed more not-het. WHY CAN'T ALL THREE OF YOU RUN OFF TOGETHER INSTEAD.

(edit 2) Oh, so THAT'S where "nobody puts Baby in a corner" comes from.

...hey, the dad is actually pretty cool, I like that. and there were some older ladies in the crowd dancing.

Ugh, slept all day. On the floor. Curled in a ball. Which actually doesn't hurt to do because I'm weird, but it's pretty pathetic-sounding.

I have art I need to post and/or scan, augh. Pens are awesome, I like pens. And ink.

I need to figure out a good way to crosspost things that is easy/uncluttered, argh. Twitter is nice to ramble at but very ephemeral/unorganized. (Sorry, again, that I'm crap at replying to comments/replies, but I appreciate them!) 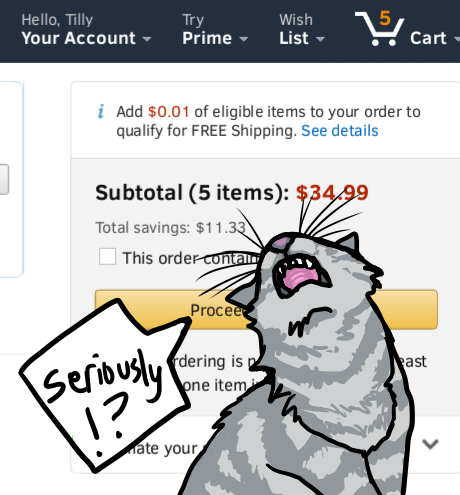 [Amazon informing me I need to add $0.01 of eligible items to my order to qualify for free shipping. "seriously!?" , comments annoyed blue tabby cat.]

Trying to wrangle the best use out of a gift card last night, and--

(Not the most substantial of posts, but I exist, really. And it's...sort of art!) 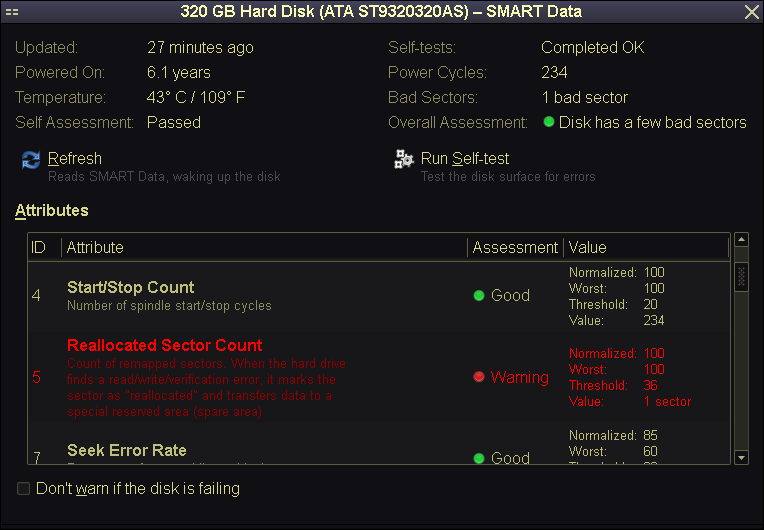 [Luke's hard drive's SMART status displaying one attribute with a warning. Oh yay, a bad sector. Just one if that value isn't lying, but...]

I am thinking given the age of this hard drive that I should...be looking for a replacement right about now between this and the ominous noises it was making earlier. Luuuuuuuuuuke--

at least I...needed to upgrade Ubuntu (probably to Mint 17) anyway...? I can install it fresh on a new drive too. hahahahaha augh why does computer have to break when I'm wonky too

I was going to get art ready to post, and now instead I'm running rsync and worrying. sigh. Luke, when did you get to be this old?
Collapse